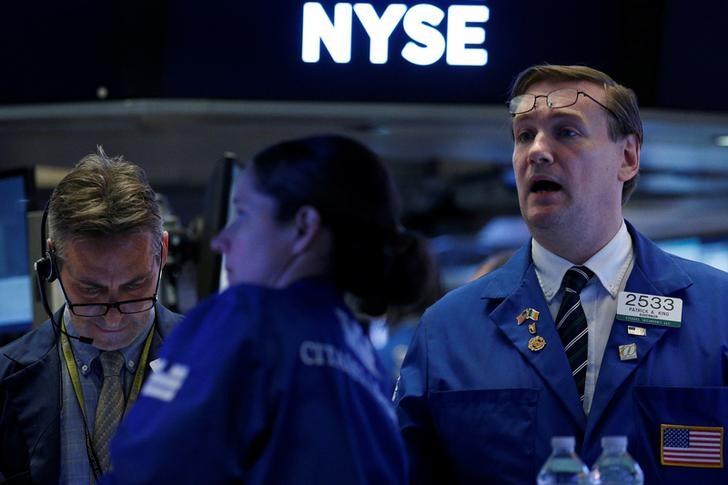 A second reading on the gross domestic product showed the economy grew at a 1.2 percent pace between January and March, slightly higher than the 0.7 percent growth estimated earlier. Economists had expected a growth of 0.9 percent.

While recent economic data has been mixed, with data showing a dip in consumer spending and sentiment, a surge in business investment and wage growth suggests activity will regain momentum as the year progresses.

Earlier this week, minutes from the Federal Reserve’s May meeting showed the central bank’s policymakers believed the economic slowdown was transitory and indicated they were on track to raise interest rates next month.

The S&P 500 and Nasdaq Composite closed at record highs on Thursday. The six-day winning streak is the market’s longest since February and investors could aim to cash in their gains ahead of the long weekend due to Monday’s Memorial Day holiday.

“The market is going to digest this move, people are going to take profits and are going to be a little cautious before the three-day weekend because, apart from all the good news, we still have potential for geo-political concerns that can come up at any time,” said Andre Bakhos, managing director at Janlyn Capital in Bernardsville, New Jersey.

The markets’ strength of late has been driven by strong quarterly earnings reports and the lack of major news updates on the political front, with President Donald Trump on his maiden presidential foreign visit.

However, with stocks at record levels and second-quarter earnings more than a month away, analysts say the market needs to see progress on Trump’s pro-growth policies, for the market to make further meaningful gains.

Retailers were among the big movers again, after helping propel the market on Thursday.

Shares of Costco Wholesale (COST.O) rose 1.7 percent to $177.65 in premarket trading, while Ulta Beauty (ULTA.O) was up 2.7 percent at $301.29 after the companies issued strong quarterly earning reports.

Deckers Outdoor Corp (DECK.N) rose 12.25 percent to $63.50 after reporting a surprise quarterly adjusted profit. Big Lots (BIG.N) was up 8.2 percent at $52.35 after the discount retailer raised its full-year profit forecast.

Among the laggards was GameStop (GME.N), which fell 7.1 percent to $21.95 as the videogames retailer left its full-year earnings forecast unchanged despite its quarterly profit beating estimates.

Economic data due includes a report at 10 a.m. ET is expected to show that a final reading on consumer sentiment index in May dipped to 97.5 from a preliminary reading of 97.7.