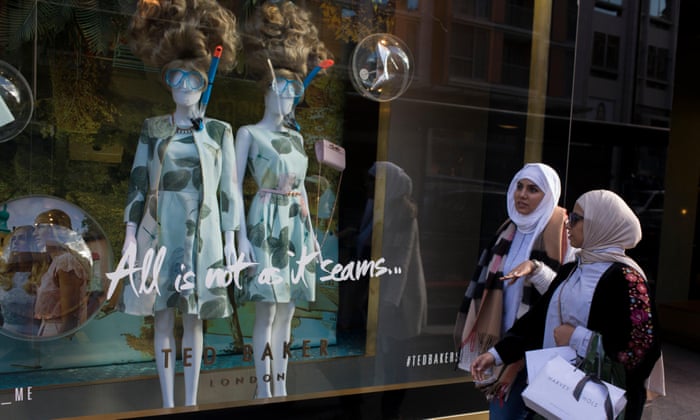 Spending on women’s clothing was down an average 4.1% per month in the first four months of this year. Photograph: Alamy

Fashion sales are in retreat across the UK as clothing purchases come under pressure from tight household finances and the lure of the gym, restaurants and entertainment.

The volume of clothing sold is expected to fall for the second successive year, declining by 0.5% in 2018 after a fall of 0.8% the year before, as the recent woes of Marks & Spencer are reflected across the high street.

M&S expanded its store closure programme to 100 sites this week, with the figures from GlobalData showing that the retailer’s problems are an industry-wide issue.

Women, who account for more than half the UK market and spend more than twice the amount men do on clothing, are cutting down on outfits and prioritising time with friends and family at pubs, restaurants and events, and going to the gym.

“It comes down to the move to the experience economy,” said Richard Lim, an analyst at Retail Economics. “The likes of M&S are struggling to keep their head above water in a declining market with all these structural changes.”

Spending on women’s clothing was down an average 4.1% a month in the first four months of this year, according to Barclaycard. This followed a 2.5% contraction in 2017, when spending on entertainment was up an average 10% and pubs 12%.

Makeup and beauty product sales are on the rise among young women, with many also prioritising paying phone bills, rent and going to the gym.

Lim says people either want a bargain – turning to the likes of Primark, B&M, Aldi and Lidl – or are seeking rich experiences at higher-end stores such as Ted Baker, Selfridges and Fortnum & Mason.

Pointing to the part of the market where M&S is positioned, he added: “People are shying away from the middle.” As a consequence, GlobalData expects Primark to overtake M&S this year as Britain’s biggest clothing retailer.

The changes in consumer spending are having a painful impact on retail outlets and staff. The M&S closure plan has affected 1,500 jobs so far, with the chain identifying 36 of the 100 stores that will shut over the next four years.

New Look is closing up to 60 of its 593 outlets and House of Fraser is expected to close at least 20 of its 59 stores under a rescue restructure planned for next month.

Some smaller chains, such as East and Bench, have called in administrators while even the previously fast-growing overseas chains H&M and Inditex, the owner of Zara and Massimo Dutti, have been affected. H&M closed six stores in the UK in the first three months of this year as sales stagnated; Inditex shut two last year.

Rising costs from business rates – a monthly tax on commercial properties – and a struggle to adapt to shoppers switching to online buying have affected a variety of retailers. Meanwhile, households’ spare cash has been squeezed by a rise in inflation since the EU referendum, although the pressure on prices has eased in recent months.

Historically, the fashion market has been driven by young people, but and Britain’s millennial generation – people born since 1981– is particularly cost-conscious. They have experienced a bigger reversal in financial fortunes than their counterparts in most other developed countries except Greece.

The Resolution Foundation thinktank found that in 2014, British people born in the years around 1980 earned 13% less than those born around 1970 did at the same stage in life.

Meanwhile, working women appear to be spending less time on fashion and a rapid growth in online spendinghas hit sales in physical stores. Less than a quarter of clothing was bought online last year, a proportion expected to rise to 27% this year, according to GlobalData.

“Shopping with your mates as a social activity, that’s a thing of the past,” said Lorna Hall, insights director at the trend forecaster WGSN. “Women are just meeting up for a coffee, at a gym class or going to an event.”

Hall also pointed to a shift to a less visible market, with young women more likely to trade secondhand clothes online, snap up bargains through services such as the fast-growing mobile phone marketplace Depop as well as eBay and Facebook.

Hall described it as “almost a dark market” in clothing, driven by a greater awareness of waste and sustainability as well as a familiarity with mobile apps not shared by older generations.

It means young people are more willing to “have some stuff for a few weeks and then sell it off and buy more”, Hall said. “It’s almost a dark market, you can’t track it in the same way as retail sales.”

Two decades of importing cheap goods from China have also left the consumer at saturation point, said Lim. “In many ways, we’ve reached an abundance of material possessions and the economic value people are attaching to them is diminishing.”