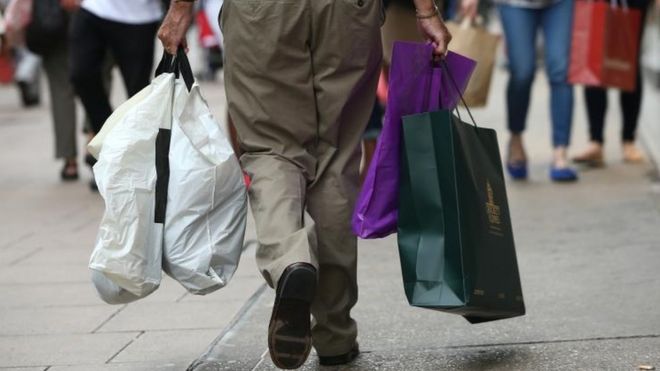 Strong growth in spending by consumers helped to drive the UK economy ahead of the Brexit vote, official figures show.

Consumer spending in the April to June period grew by 0.9% from the previous quarter, the fastest pace since 2014.

The ONS kept its estimate for UK economic growth at 0.6% for the second quarter, unchanged from the initial reading.

“Our survey returns, which include the period leading up to and immediately following the referendum, show no sign so far of uncertainty having significantly affected investment or GDP,” said ONS chief economist Joe Grice.

Business investment increased by a stronger-than-expected 0.5% in the quarter having fallen in the first three months of the year.

However, the UK’s widening trade deficit was a drag on growth during the April-to-June period.

Thomas Laskey, from Aberdeen Asset Management, said the ONS figures showed business investment was “fairly resilient” despite the uncertainty in the run-up to the referendum.

“This is the number that many investors are keeping their eye on, given how sensitive it may be to Brexit.

“The Bank of England significantly lowered its forecasts for business investment in the recent Inflation Report and Mark Carney has been pessimistic about the outlook.”

Data released since the Brexit vote in 23 June has been mixed. Some business surveys suggested there had been a sharp slowdown in activity in the immediate aftermath of the referendum, but retail sales figures for July, released last week, were stronger than expected.

Many economists have predicted a marked slowdown in the UK economy following the referendum.

Howard Archer, chief UK and European economist at IHS Global Insight, said that while he still had “serious concerns over the UK growth outlook, we are a little less pessimistic than we were in the immediate aftermath of the Brexit vote”.

However, he added that it was “likely to be some considerable time before the economy again expands anything like 0.6% quarter-on-quarter”.

“We suspect that the UK’s vote to leave the European Union in the 23 June referendum will increasingly weigh down on UK economic activity over the coming months.”

However, he added: “With a number of recent surveys from the CBI and others showing bouncebacks from post-vote lows, strong official retail sales numbers for July, and the support offered by the package of measures announced by the Bank of England, predictions that the economy will fall into recession look unduly pessimistic.”