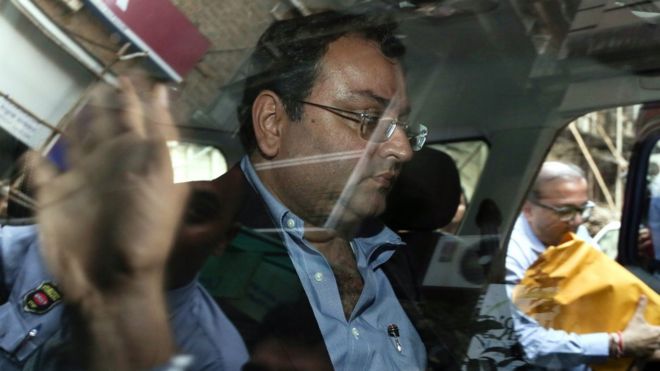 The bitter feud at the top of India’s giant Tata industrial empire is continuing in full spate.

Tata Sons, the holding company, is now trying to force out its former chairman, Cyrus Mistry, from all parts of its vast business.

It is trying to remove him from the boards of several subsidiaries such as Tata Motors, Tata Chemicals, and Tata Steel.

Mr Mistry was sacked as overall chairman last month, out of the blue.

The surprising move soon exposed a saga of bitter disagreement at board level, with claim and counterclaim thrown around to the general astonishment of onlookers.

Among the latest developments – which have been compared to the plot of a Bollywood drama – Mr Mistry has rejected claims that he mishandled an allegation of harassment at the group’s hotel business.

The allegation has gained widespread traction in the Indian media as one of the reasons for his sacking, though that claim itself has not formed part of the group’s public explanation for Mr Mistry’s sudden sacking.

A nine-page counterblast to Mr Mistry was published on Thursday which finally detailed some of the company’s complaints against its former chairman.

It spoke of low profits, rising debts and poor management of key business projects, such as the sale of its UK steel businesses.

Mr Mistry was also removed from his post as chairman of one key subsidiary, Tata Consultancy Services (TCS), on Thursday.

But a source close to him accused TCS of acting beyond its powers and in a “cloak and dagger” fashion.

The source claimed that no board meeting of TCS was called to discuss the proposal from Tata Sons to oust him, nor was there a formal discussion of the matter.

“In pre-mediated haste, by a letter of the same date, TCS has directly gone on to announce that Mistry stands replaced,” said the source.

“The hasty actions appear to have been done at night.

“Cloak and dagger machinations with little regard to due process of law has come to define the angry strategy of the Ratan Tata camp.”

Now, as part of further efforts to oust him from the wider empire, Tata Sons has called an extraordinary shareholder meeting at Tata Motors – which owns among others Jaguar land Rover – to remove him from the board there.

A similar meeting has now also been called at Tata Chemicals, Tata Steel and Indian Hotels.

Despite these moves, Mr Mistry retains support from some senior colleagues.

Some board members at Indian Hotels and Tata Chemicals have said he should stay in post as their chairman.

It has not yet been announced when the special shareholder meetings will be held.