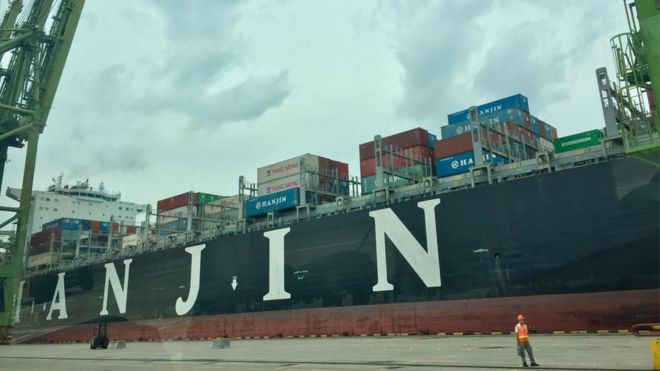 Hanjin Shipping used to be one of the world’s top 10 shipping companies. But now, the final curtain has fallen.

This Friday, the firm was declared bankrupt by a South Korean court after months of uncertainty.

Hanjin’s collapse is the largest to hit the shipping sector and it sent shockwaves through the industry.

For years, the global economic downturn had affected profits across the cargo shipping industry. It led to overcapacity, lower freight rates and rising debt levels.

The question was not whether a big shipping line would go under, but which one would be first. The questionable honour eventually fell to Hanjin, at that time South Korea’s biggest shipper and number seven in the world.

Crippled with $5.4bn (£4.1bn) in debt in August 2016, the company failed to get any more money from its creditors. Hanjin went into receivership and applied for court protection.

There was still a chance for an investor or the government to come to the rescue yet it quickly became clear that any such hopes were futile.

No chance for a rescue?

With Hanjin’s situation suddenly in limbo, its ships were stranded at sea. Most ports refused them entry, fearing they would not get paid for loading and unloading the cargo. Some ships were arrested while docking as debtors had issued warrants to get at least some of their money back.

Technically though, there still could have been a rescue – Hanjin needed to find an investor or convince the government to step in.

“There was likely a window of some 24 to 48 hours after the announcement where Hanjin could have been saved, but after that it was simply a snowball effect and it was unrealistic to bring back the company,” says Mr Jensen.

The chaotic demise of the company’s operations did little to shore up confidence. So over the following months, many of the better assets got sold off – ranging from vessels to cargo terminals in the US to its Asia-US route operations.

The buyers were other global shipping companies that were able to cherry pick what they wanted. “All the good assets have been sold, the carcass has been thoroughly cleaned up,” says Greg Knowler, a maritime trade specialist at IHS.

After Friday’s official bankruptcy, the court handling the liquidation process will proceed to sell off the remaining assets and give the money to the creditors.

For the seamen, the collapse of their company meant that almost all of them lost their jobs. Hanjin’s ships had been crewed with South Korean officers and engineers and an international mix of seamen hired through agencies.

One of those now unemployed is captain Moon Kwon-do, who last year was stuck for months on the Hanjin Rome after it had been seized by creditors in the Singapore port.

“I will never sail again, I will abandon my life as a seaman,” he says with bitterness and frustration.

Despite a lot of protests organised by unions, the government in Seoul did not step in to help. Yet there’s doubt that saving Hanjin would have worked.

“If you’re shipping cargo anywhere in the world – would you have gone with Hanjin after that?” asks Mr Knowler. The sudden suspension of all the company’s vessels had led to supply chain disruptions around the world.

“I don’t think it could have been saved,” he concludes.

In fact, as dramatic as it was for Hanjin, for the rest of the industry the failure of one of the big players might have been a lucky break.

“This was a long time coming, it’s what was widely needed,” says Mr Knowler. “So from this perspective this was a good thing.”

Hanjin’s bankruptcy has a good chance of bringing global overcapacity in the sector down to a sustainable level.

“Everyone will be seen to have had a hard time in 2016,” says Mr Jensen. Fellow shipping giant Maersk, for instance, earlier this month revealed a $1.9bn net loss for 2016 – just its second annual loss since World War Two.

“2016 was the bottom of the market, but the climb upwards towards a more balanced market will take two to three years to fully accomplish,” says Mr Jensen.

Analysts agree that it is unlikely there will be another large carrier like Hanjin failing. South Korea is now left with Hyundai Merchant Marine (HMM) taking over as the country’s biggest shipping company.

And while last year HMM was in as much financial trouble as Hanjin, the collapse of its fellow shipper means that it is now on a much safer footing, says Mr Knowler.

“There is absolutely zero chance that the Korean government will let another major shipping line – now their only major line – fail.”