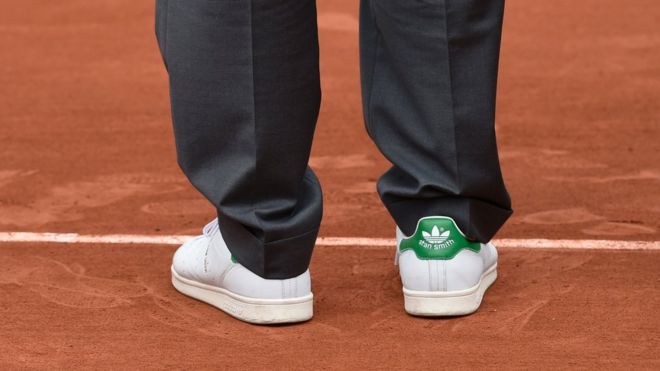 The New York athletic-wear chain said sales in the February-to-April period rose 0.5% from 2016 at stores open at least a year.

The news sent shares of the company down 15% in trade on Friday morning.

Chief executive Richard Johnson said he was “not satisfied” with the results. The firm is crafting a “plan B” for the year, focused on controlling costs.

Total Foot Locker sales topped $2bn, up 0.7% year-on-year, thanks to some new stores.

But delayed tax refunds in the US depressed traffic in February, traditionally one of the firm’s biggest months, Mr Johnson said.

He also said the craze for classic Adidas Superstars and Stan Smith trainers had died down, without being replaced by a comparable must-have item.

Sales increased as the period progressed, he added, repeating observations made by other retailers.

“It was a bit of a rollercoaster ride,” he said.

Foot Locker, which has a global footprint of more than 3,350 stores and brands such as Champs Sports and Runners Point, said total profits were $180m in the quarter, down more than 5%.

Deutsche Bank analyst said Paul Trussell said industry analysts did not have confidence that Foot Locker could deliver on its promised sales growth in the rest of the year.

“I don’t sense a comfort level with that view,” he said. “Help us get more confident on that front.”

Mr Johnson said the company remained secure in its position.

“We are living in a world that is casualised,” he said. “Sneakers are a very important part of our consumers’ wardrobe.”