David Cameron was dragged into the row over international tax avoidance last night after fresh revelations about his late father’s offshore investments.

Experts said the way it held meetings in the Caribbean and Switzerland appeared little more than a ‘conjuring trick’ to make it seem the firm was based outside the UK when key decisions were actually taken in Britain. 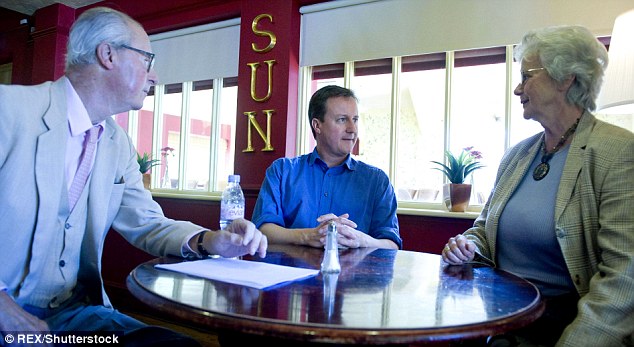 Cameron, pictured with his parents Ian and Mary Cameron, has been dragged into the Panama Papers scandal after it emerged that his father Ian’s (right) firm was based offshore and involved in tax avoidance

Prime Minister David Cameron, pictured with his late father Ian, refused to say if his family still benefits from offshore funds after the revelations yesterday

Last night the Prime Minister refused to say whether his family still benefited from offshore funds – insisting it was a ‘private matter’.

But senior government officials said Mr Cameron does not personally own shares in any company and no shareholdings are registered in the list of MPs’ interests.

As Prime Minister he has spearheaded efforts to make global finance more transparent.

He has spoken out repeatedly against tax avoidance and is  hosting a major summit on the issue next month. 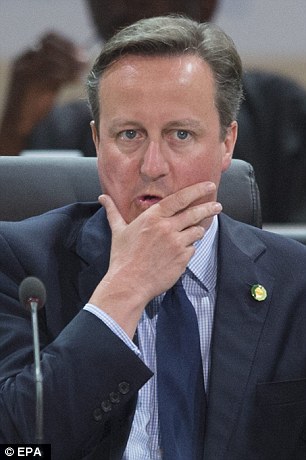 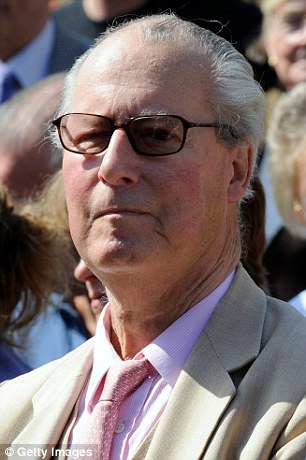 Senior government officials said David Cameron (left), who is not involved in his father’s (right) business, does not personally own shares in any company and no shareholdings are registered in the list of MPs’ interests
Hiding money in Panama is ‘breaking the law’ says tax expert
The details about his father’s affairs emerged following the leak of 11.5million secret documents from the offices of Panamanian law firm Mossack Fonseca. As more world leaders, celebrities and business figures were compromised: 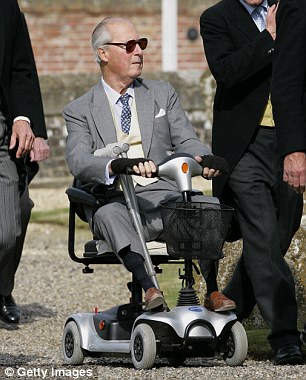 It emerged in 2012 that Ian Cameron had run a network of offshore investment funds to help build the family fortune.

Though entirely legal, the funds were set up in tax havens such as Panama City and Geneva, and were said to have explicitly boasted of their ability to remain outside the UK tax jurisdiction.

Ian Cameron, who died in 2010, was said to have been instrumental in setting up Blairmore, which was run from the Bahamas but named after the family’s ancestral home in Aberdeenshire.

It managed tens of millions of pounds on behalf of wealthy families. Clients included Isidore Kerman, an adviser to Robert Maxwell, and Leopold Joseph, the private bank used by the Rolling Stones.

John Mann, a Labour member of the Treasury select committee, demanded that No 10 publish full details about the links between the Cameron family and Blairmore.

‘Parliament and every taxpayer have a right to know whether any of this money is still hidden offshore,’ he said.

And Jeremy Corbyn demanded that the Prime Minister ‘stop pussyfooting around’ and take action to tackle tax dodgers.

The Labour leader will insist today there cannot be ‘one set of rules for the wealthy elite and another for the rest of us’.

He will argue avoidance of tax by wealthy firms and individuals is starving public services of vital funding.

Mossack Fonseca said it had operated ‘beyond reproach’ for 40 years, simply set up firms and had never been charged with criminal wrongdoing.

Government sources insisted they had taken tough action on tax evasion and aggressive tax avoidance, ending the situation under Labour when some City bosses were paying less tax than cleaners.

But Richard Pyle of Oxfam said the UK was in a unique position ‘to help clean up the murky world of tax havens’ and should ensure the real beneficiaries of offshore companies were revealed.

David Cameron will meet world leaders next month to work on new tax avoidance measures but the massive leak of the Panama papers could overshadow the London summit.

No 10 yesterday insisted the Prime Minister and Britain had been global leaders on cracking down on tax evasion and aggressive avoidance.

But after the leak of millions of papers – suggesting, among others, Mr Cameron’s father and a string of Tory donors sheltered money off shore – threatens to undermine the talks. 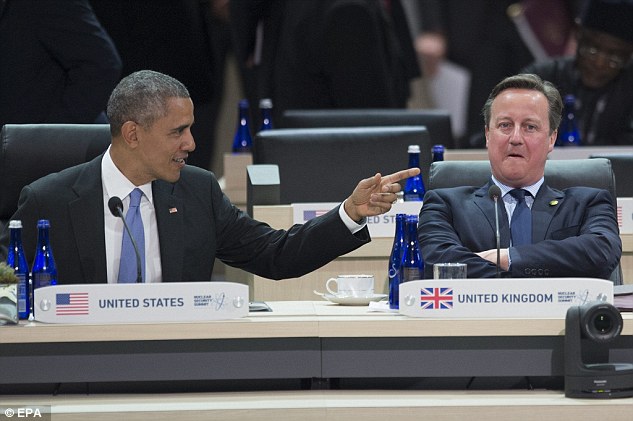 David Cameron, right at a summit in Washington with Barack Obama last week, struck a deal on international tax avoidance with the US President and other G8 leaders in 2013. He is hosting a follow up meeting in London next month

White House pushes for international financial transparency
Campaigners have demanded British legislation to end UK tax havens – including in the crown dependencies of Jersey, Guernsey and the Isle of Man.

The Prime Minister placed tackling global tax avoidance at the heart of his G8 presidency in 2013 and is working to follow up on the agreements made.

Mr Cameron has been a vocal advocate of reform and legislation forcing British companies to disclose who owns and benefits from their activities which comes into force in June.

Despite several years of pressure however, few UK Crown Dependencies and Overseas Territories – which are said to make up a large part of the tax havens referred to in the papers – have taken concrete action to open up the books.

WHAT ARE OFFSHORE ACCOUNTS AND HOW ARE THEY USED?

WHAT ARE OFFSHORE OR SHELL ACCOUNTS?

Offshore bank accounts and other financial dealings in another country can be used to evade regulatory oversight or tax obligations.

Often, companies or individuals use shell companies, initially incorporated without significant assets or operations, to disguise ownership or other information about the funds involved.

WHERE ARE MOST OFFSHORE ACCOUNTS?

Panama, the Cayman Islands and Bermuda are among more than a dozen small, low-tax locations that specialize in handling business services and investments of non-resident companies.

Companies or trusts can be set up in offshore locations for legitimate uses such as business finance, mergers and acquisitions and estate or tax planning, according to the global money laundering watchdog, the Financial Action Task Force.

Shell companies and other entities can be misused by terrorists and others involved in international and financial crimes to conceal sources of funds and ownership.

The ICIJ says the files from Mossack Fonseca include information on 214,488 offshore entities linked to 14,153 clients in 200 countries and territories.

EFFORTS TO CRACK DOWN ON FINANCIAL HAVENS:

Financial and legal professionals get training on how to spot potential violations, since in some cases lawyers and bankers are unaware they are handling illicit transactions.

The EU has stepped up efforts to crack down on tax avoidance by multinational corporations.

He faces pressure to secure progress at an international summit on tackling corruption which he will chair in London in May and where the use of offshore tax havens to escape scrutiny will be high on the agenda.

Mr Cameron’s official spokeswoman today insisted good progress had been made since 2013.

She said: ‘We want to see the overseas territories and crown dependencies play their part and that is why we will continue to push them to do so and as I have said the Prime Minister has made clear that should they fail to do so, he rules absolutely nothing out.’

Asked if any cash should be repaid she added: ‘That is a matter for HMRC.’

Mr Cameron’s spokeswoman said Britain was ‘leading the pack internationally’ on the issue and said 90 countries were now signed up to policies agreed at the G8 in 2013.

Turning to next month’s summit, she added: ‘We will be looking at a range of areas – this was something the Prime Minister decided last summer ahead of the G7 meeting in Germany that we should try focus on this issue as a country that is meeting its commitment to 0.7 per cent aid spending.

‘May’s summit will be an opportunity to bring together leaders, international organisations, NGOs, to look at is there more we can do in this area to do with tax and transparency or, indeed, in other areas such as sport.’

Shadow chancellor John McDonnell said not enough had been achieved.

‘Cameron promised and has failed to end tax secrecy and crack down on ‘morally unacceptable’ offshore schemes,’ he said.

He said: ‘Currently, true ownership of companies registered in British Overseas Territories is shrouded in secrecy due to the use of nominated directors and shareholders making it impossible for tax authorities to find out who really owns and benefits from the company.

‘This has to stop and the Tories are running out of excuses as to why they have not done more to stop this dubious practice.’

Ahead of the 2013 summit, Mr Cameron insisted tax havens had a right to be low tax jurisdictions but said rules had to be transparent and enforced fairly.

From June, firms registered in Britain have a legal obligation to obtain and hold adequate, accurate and current information on the ultimate owner who benefits from the company.