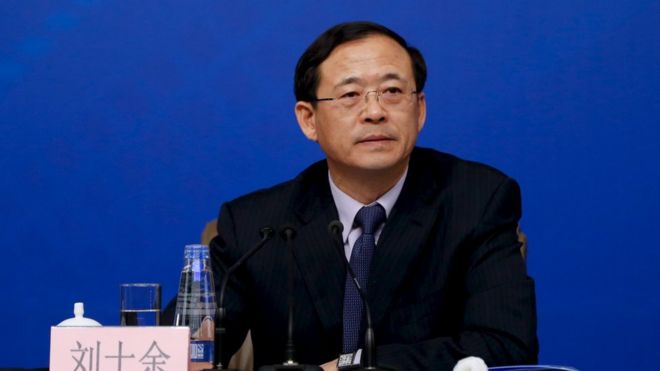 China has removed the head of its securities regulator as it tries to tackle major volatility in its stock markets.

Xiao Gang was replaced by Liu Shiyu as the chairman of the China Securities Regulatory Commission (CSRC), state media report.

Mr Xiao was in charge when China’s markets crashed in mid-2015.

At one point, the Shanghai and Shenzhen stock exchanges lost as much as 40% of their value.

Mr Xiao, 57, who became the CSRC chair in March 2013, has been criticised for mishandling the crisis.

Under his watch, China’s new “circuit-breaker” mechanism, designed to limit any market sell-off, was deployed twice in January in response to the stock market fall, but then was scrapped altogether after it caused even more panic.

“Somebody needed to bear responsibility after the suspension of the circuit-breaker system,” Zheng Chunming, a Shanghai-based analyst at Capital Securities Corp, told Bloomberg News.

Mr Liu, 54, was previously the vice-governor of China’s central bank – the People’s Bank of China – before becoming chairman of the Agricultural Bank of China, the country’s third largest lender, in 2012.

On Chinese micro-blogging site Weibo on Saturday, commentators played on Mr Liu’s name to speculate whether his tenure would bring about a “bull market” or leave behind a “dead fish”.

The announcement of the new CSRC chair comes ahead of two high-profile events for China – next week’s meeting of G20 financial leaders in Shanghai, and the annual gathering of China’s legislature in March.