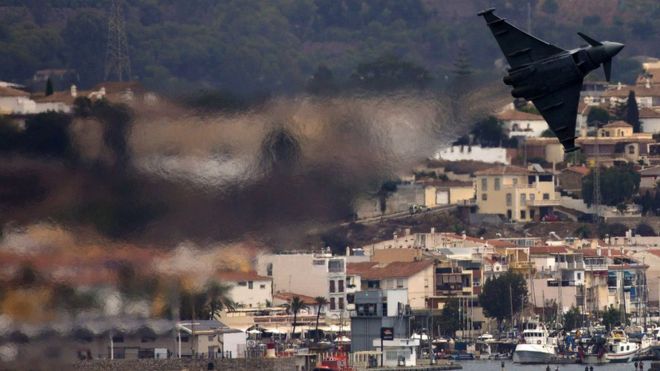 Austria is to sue Airbus and the Eurofighter consortium over a 2 billion-euro (£1.7bn) deal to buy Typhoon warplanes.

Its defence ministry said that following an investigation it believed Austria had been misled over the purchase price.

It could sue the two companies for 1.1bn euros, it said.

Airbus said the allegations had taken it by surprise and that it was “a political manoeuvre”.

Airbus and Eurofighter charged nearly 10% of the purchase price for offset deals, which involve work for local contractors, said the defence ministry’s report. This should have been charged separately, it said, and means it is suing for at least 183.4 million euros.

It says the 1.1bn euro figure is its calculation for the difference in price between the Eurofighter and a cheaper option.

Defence minister Hans Peter Doskozil said the investigation suggested “Austria would not have decided to purchase the Eurofighter in 2003 without the fraudulent deception”.

Austria ordered 24 Eurofighter jets in 2002 but reduced its order to 15. It then ordered a review of the purchase in 2012 in light of bribery allegations.

Mr Doskozil said the first order of Eurofighters used by the German army are “very expensive during operation” and that the Eurofighter programme would cost Austria 80 million euros in 2017. He will commission a new report to find a cheaper alternative, he said.

The Eurofighter programme is a joint venture between Airbus, BAE Systems and Italy’s Leonardo to provide a modern fighter jet for the UK, Germany, Spain and Italy, as well as other buyers. The UK bought 160 of the aircraft.

“Airbus is surprised by media reports of a criminal complaint and alleged repayment claims on the part of the Austrian Ministry of Defence against Airbus Defence and Space and Eurofighter,” Airbus said in a statement.

“We have received neither notification of a criminal complaint nor any other information regarding this matter or the ministry’s accusations. These new accusations have never been raised before; we thus cannot see any foundation in particular for the allegations of bad faith and fraud. Rather, they appear to be contrived, and we deny them vigorously.

“We see today’s announcement as a political manoeuvre. We are, of course, continuing our policy of actively supporting the Austrian authorities in investigating concrete suspicions.”