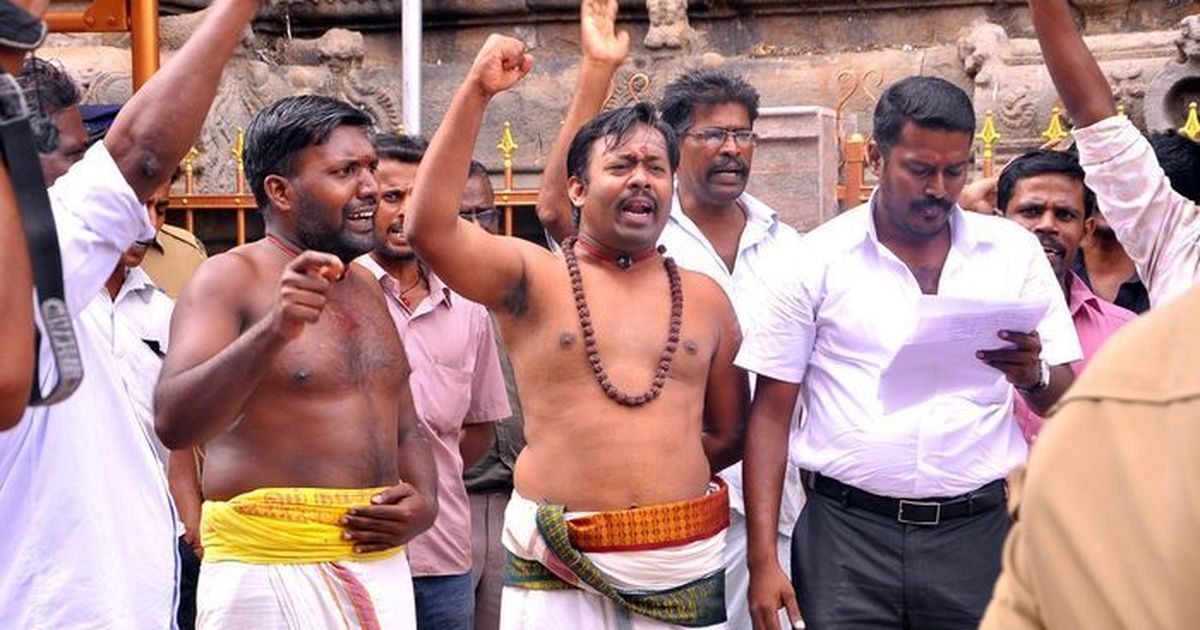 In October, the Travancore Devaswom Board recommended the appointment of 36 non-Brahmins, including six Dalits, as priests in the temples it manages in Kerala.

This came after the Kerala Devaswom Recruitment Board for the first time conducted a written test and interviews for candidates. The recruitment board, which fills permanent positions in the state’s temples, made the appointments according to norms laid by the state’s reservation policy. This was seen as a progressive step towards eliminating caste discrimination in Hindu religious places, where Brahmins have traditionally held sway.

In neighbouring Tamil Nadu, this development struck a nerve among a section of student-priests from non-Brahmin communities. In 2007, the state government had recruited over 200 people belonging to Dalit and other backward communities and trained them to serve as priests in temples. But ten years later, these priests are still waiting for jobs.

At the beginning of December, several members of the student-priests’ association gathered in Chennai to discuss how to solve their predicament. “Now that the temple in Kerala has taken this step, our hope of securing a post in a temple has also been revived,” said Ranganathan, the leader of the association.

In 2006, the Dravida Munnetra Kazhagam state government in Tamil Nadu had passed a Government Order allowing people from non-Brahmin castes to be appointed as priests in all state temples. This would include temples such as the Meenakshi Amman Temple in Madurai, the Srirangam temple in Tiruchirapalli and the Parthasarathy temple in Chennai, where only Brahmins have performed priestly functions over the centuries. The move was aimed at fulfilling social reformer Periyar’s dream of social parity in religious places.

About 10 years ago, G Balaguru, from a Dalit community in Pallipattur near Tiruchendur, was one of 600 candidates standing in a line outside the Arulmigu Subramaniya Swamy temple in Tiruchendur town of Tamil Nadu, waiting for his turn to be interviewed. Only 40 were selected to train as priests. He was one of them.

In 2007, the government set up six professional centres across the state where the 206 candidates selected through the interview process were trained in agamic rituals and mantras.

“The scheme was directly under Chief Minister M Karunanidhi, so every now and then, ministers and party officials would visit the centres to ensure that we were being trained properly,” said Ranganathan, who was trained in the centre in Tiruvanamalai.

This was the first time that priests from Dalit and other backward communities were poised to enter the sanctum sanctorum or inner shrine of Tamil Nadu’s major temples.

Balaguru, who studied only up to Class 10 before he began working as a local priest in his village, said: “Being a priest in small, local functions is not such a big deal. I have always had the desire to serve god at the Subramaniya Swamy temple [in Tiruchendur]. To be given that opportunity would be an honour.”

However, the Supreme Court stayed the Government Order after the Adi Saiva Sivacharyargal, an association of Brahmin priests in Madurai, challenged the directive. Despite the stay, the Tamil Nadu government continued to train the priests in the hope that the stay would eventually be lifted.

“When we joined the course in 2007, we were assured of a job within a year,” said Ranganathan. “But once we finished our course in 2008, we were not given our certificate for a while. Only then did we find out about the stay order. We were told we would not get jobs until it was lifted.”

On December 16, 2015, the Supreme Court delivered its final judgement on the Government Order. The court ruled that individual shrines could appoint temple priests in accordance with the Agamas they followed – the collection of scriptures relating to vital areas of Hindu life, including the conventions of temple buiding, philosophical precepts and temple rituals. This, the court said, would not be a violation of the constitutional right to equality. The court said that the selection criteria should not be based on Constitutionally unacceptable parameters such as caste or birth. But the judgement seemed paradoxical: if the Agamas followed by a particular temple prescribed that only people from a certain lineage could practice as priests in that shrine, the court allowed that rule to be followed.

“The 2015 [Supreme Court] judgement has allowed the practice of untouchability to continue,” said Ranganathan.

In recent years, the student priests’ association has held several protests demanding that the government provide them with jobs. “We have been beaten up so many times by RSS [Rashtriya Swayamsevak Sangh] groups and Brahmin associations,” said Ranganathan.

The student priests have also met almost every political leader, including Karunanidhi and the late J Jayalalithaa, to support their cause, but to no avail.

Ranganathan, who has a degree in computer and communication technology, now works for a company in Chennai. He said that over the past 10 years, he has been offered bribes to stop the protests. “Had I gone down that path, I would have made many lakhs [of rupees] by now,” said Ranganathan. “[But] we have to fulfil Periyar’s dream of eliminating caste discrimination.”

Another student priest, Venkatesh, has gone back to the local temple in Tiruvanamalai, and conducts marriages and pujas during household functions.

Thirty-three-year-old Balaguru now works in a small temple in Palliputtur village of Tiruchendur. “I make enough money, that is not the issue,” he said. “The problem is, we are not considered as equals.”